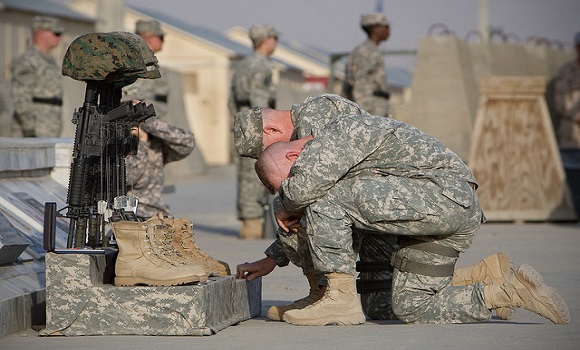 Many people entering the military may feel influenced by people around them. They get encouraged to undertake a guise of being ‘mentally tough,’ so they can succeed. Eventually, they learn that acting tough isn’t enough to successfully cope with the things that may occur around them.

A lot of soldiers today underestimate the importance of mental preparation for handing experiences in the military. However, some have suggested that the U.S. Military should start teaching the principles of stoicism to trainees. While a number of soldiers do get exposed to stoic principles from the beginning, others don’t learn what stoic philosophy can do for them as people.

So, why should today’s soldiers believe in a relatively unconventional belief system? As we’ve explained in other articles, stoicism has the potential to be incredibly powerful to a group of soldiers. In the most basic terms, stoicism teaches people that ‘whatever happens has happened as a result of forces they can’t control, and has no real effect on their character.’

Soldiers, especially those who enter the military unprepared, can learn how to accept what happens to them if they adopt a stoic mindset. Stoic philosophy can instills that mindset within people. It inherently encourages people to respond without allowing external forces to influence their true character.

Why Modern Stoic Philosophers Suggest Stoicism for Coping with War

Until the 20th century, little was known about how war affected soldiers on a psychological level. Progress in mental health research helped mental health professionals discover the high occurrence of post traumatic stress disorder in soldiers. Following the Vietnam War, medical researchers began aggressively studying the psychological effects of war on people who have served in the various wars of the past, including those that still wage today.

PTSD causes people to develop what’s known as ‘traumatic functioning.’ This causes them to remain in a situation where they’re stuck acting out negative behaviors that prevents them from being their true character. People with PTSD often feel stuck in these ‘ways’ and feel powerless about getting out.

Soldiers who aren’t adequately prepared for their time in the military are prone to developing some type of traumatic functioning, which many don’t recognize as disordered thinking in any way. Stoicism, on the other hand, can help people break away from the cycle, helping them flourish as human beings again.

Why All Soldiers Need To Be Stoic Philosophers

In a previous article, we touched upon how stoicism can help soldiers accept their humanity. Many don’t know how to cope with being sent to war, especially if they’re deployed faster than they can take in the situation. A lot of soldiers in this situation choose to respond with negative feelings, usually fear and resentment. Stoicism, however, can help soldiers accept the inevitable. Accepting the inevitable is the most sobering thing about being human: being unable to influence outside forces, but being able to accept that what happens, happens.

Stoic philosophers also stress another important aspect of stoicism: the way people objectively act against nature determines their character. The idea is that people, while influenced by external forces, can choose to act objectively to preserve their character. What happens to us, whether affects us mentally or physically, doesn’t have any real bearing on our true character.

Soldiers who have lived through tough experiences can use stoicism to regain their confidence in life. The underlying principle of acceptance in stoicism plays a large role in helping soldiers to cope with traumatic experiences over time, eventually becoming stronger as a person and as a member of society.

Stoicism, as we’ve mentioned throughout the article, can help soldiers become mentally resilient and accept the inevitability of life. The principles bought forth in this philosophy have played a long term role in not only the mindsets of war veterans, but the military as a whole.

Some would say that stoicism is the military’s unofficial philosophy. According to various records, texts and studies, that sentiment is very much true. Nancy Sherman’s The Stoic Warrior notably recollected how ‘stoicism is a driving force behind the military’s prevailing mindset, particularly due to its focus on self control, inner strength and endurance.’

In tough situations, soldiers may become isolated, imprisoned or abandoned without contact with others. The desolation and hopelessness of such situations often cause people to develop mental trauma—they’re left alone, captive with their negative thoughts, believing that they’re the one responsible for such an inevitability.

Stoic philosophers, however, argue that the principles of stoicism – self control, inner strength and endurance – helps soldiers positively accept and cope while stuck in a mentally and/or physically traumatizing situation. Many soldiers, even if they don’t know about stoicism, undertake such a mindset in order to survive.

Survival—it’s a sentiment that’s shared among many soldiers. Stoic philosophy has the potential to help soldiers cope with what happens to them while they’re enlisted. Not only can they develop the mental resilience and self control they need to survive, but it can also help them get through a world where they might think they don’t have help.