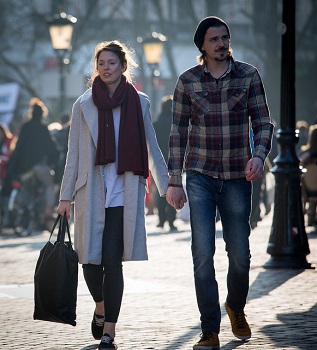 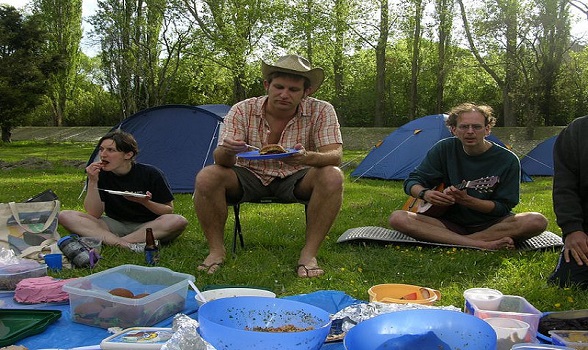 The five things you need to keep in mind while camping as a vegan.

As the days finally grow cooler, and the trees begin to change, there’s no better time to go camping then in late August or September. And there’s no better place to go camping then right here in New England. From the Berkshires of Massachusetts and the campgrounds of Rhode Island to the mountains of New Hampshire, boundless woods of Maine, and tranquil ponds of Vermont. Finding a place to go camping in New England isn’t the hard part, the hard part is being able to have that authentic camping experience, while still keeping it vegan.

Through all my years of camping and going from carnivore to vegan, my hunting knife has now been replace by a tofu press, my fishing pole by a portable blender, and my reserve of hotdogs—for when I didn’t catch any fish, which I usually didn’t—replaced by Seitan beef. When I went camping this year, though, I knew that I wanted to go back to just the basics. I didn’t want to worry about bringing extra batteries for the blender or that special grill and tinfoil for the tofu; I want just man, nature, and food. And luckily, for just a couple of bills, I was able to reserve a campsite for a long weekend. With two fellow vegans, I headed into the wilderness of New Hampshire.

The following tips—learned from experiences, and fellow vegan campers—will not only help you preserve your veganess while having an authentic camping experience, but will also help preserve the campgrounds so that you can return year after year.

1. Bugs: It’s debatable, but most vegans are against killing bugs; especially for no reason, other than they’re annoying. During one camping trip last fall, a friend had brought with him one of those two hundred foot area bug bombs. The thing was crazy. The mushroom cloud it created reminded me of the bombs I’d seen exploding in Iraq. Not only was this thing killing every mosquito within a two hundred foot radius, but it was killing every bug in the area, and it certainly wasn’t helping the birds, or any other animals who breathed it in—namely, me.

Bug bombs, if you don’t already know, are not the best option. Any type of spray, whether it’s a bug bomb, or typical repellant spray, is not good for the environment or the animals in that environment. If you’re going to use a bug repellant, then the best option is a lotion rather than a spray, as fewer toxins are released into the air for birds and animals to breathe in. However, if you’ve got something against even lotion bug repellants, chemicals and all; you could always use the army method and just break the tops off a pack of matches and swallow those to keep the bugs away—it’s not recommended. The best option, though, besides bug repellant lotions, and swallowing matches, is to start a campfire.

2. Building a fire: It’s not camping without a campfire, plain and simple. There needs to be a place to tell ghost stories, sip beer, and listen to your friend play the same song on his guitar—over, and over, and over, again. When building a campfire, though, there’s more to it than meets the eye. A good campfire should have as minimal impact on the environment as possible, and it should leave no trace after you’re gone. To do this, you need to follow three simple rules:

3. Food: It’s not camping unless you’re cooking something over a fire, and vegans have more camp-worthy foods than most would think. My favorites are Field Roast Mexican Chipotle sausages and corn on the cob. The corn on the cob and sausages also allow for those, all too necessary, male induced camping jokes that are not possible when eating a block of tofu or drinking celery smoothies, “Good sausage, man,” “Mine’s a little bit bigger than yours,” “I like to nibble on just the tip…” Anyways, a thin stick found in the woods can easily be whittled down to a point to hold your sausage and corn over the fire.

And then let’s not forget the s’mores! I was vegan for a full YEAR before I discovered there was such a thing as vegan marshmallows. Before camping this year, I bought a big bag of them, along with several dozen dark chocolate candy bars, and a box of cinnamon graham crackers. Along with our fire-cooked sausages, corn on the cob and s’mores, all three of us felt as though it was as close to an authentic experience as possible. We didn’t miss our blenders, Vitamix’s, tofu presses or stoves, at all.

4. Hiking: Keep to the trails that are clearly marked. I know that it seems lame, and like the ‘square thing’ to do. But parks often have suggested routes and closed off areas for a reason. Whether it’s the rare birds that are nesting in the area, the turtles who’ve just laid their eggs and which you’re likely to step on, or simply that the area is damaged, the rocks could be loose and the slightest nudge by an uninformed hiker could send the whole place into a disarray killing hundreds of animals and creating a landslide. And please, if you’re vegan, do not go hiking or camping when its hunting season, it just feels too much like the set up for some crude joke to have a vegan get shot by a hunter.

5. Trash: Do not leave your trash behind! Even if you think it’s organic, “But it’s compostable, man.” Screw what you do at home; the forest isn’t the same as that crappy compost heap you keep behind the shed at your mom’s house. The forest is a self-sustaining environment and our job as good vegan campers is to leave as little impact on the landscape as possible. Take everything home!

Follow these simple rules and your next vegan camping trip will be all the more fun, and better for the environment!