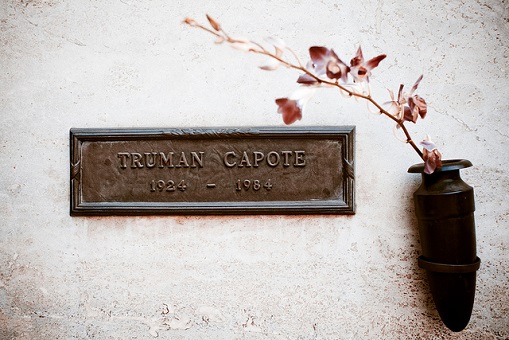 First published in 1966, In Cold Blood, by Truman Capote was a new type of book.  A hybrid of literature invented by Capote known as a non-fiction novel; the book is based on a series of crimes and, told in an omniscient third person point of view.  It was one of the first of its kind, if not, debatably, the first, and it cemented Capote’s mark on the world of literature.  Many things can be said of this book, and many things, too, can be taken away.

Truman Capote’s writing style is excellent and he has a tremendous knack for scenery, as can be seen at the very beginning of the book:

“The Village of Holcomb stands on the high wheat plains of western Kansas, a lonesome area that other Kansans call “out there.”  Some seventy miles east of the Colorado border, the country side, with its hard blue skies and desert-clear air, has an atmosphere that is rather more Far West than Middle West.  The local accent is barbed with a prairie twang, a ranch-hand nasalness, and the men, many of them, wear narrow frontier trousers, Stetsons, and high-heeled boots with pointed toes.  The land is flat, and the views are awesomely extensive; horses, herds of cattle, a white cluster of grain elevators rising as gracefully as Greek temples are visible long before a traveler reaches them.”

Capote’s character descriptions are short, yet powerful and memorable:

“Dick stripped to his briefs was not quite the same as Dick fully clothed. In the latter state, he seemed a flimsy dingy-blond youth of medium height, fleshless and perhaps sunken-chested; disrobing revealed that he was nothing of the sort, but, rather, an athlete constructed on a welterweight scale.”

And he also has a tremendous grasp of plots and what makes a story flow—the book itself took near a few days to read, and kept me captivated throughout, even though I was already aware of the arc and end of the story. All three of these aspects of writing, scenery, character, and plot, Capote proved he was adept at and had a strong understanding of; and it was interesting to see him tackle a new literary technique; however, although a lot could be learned from his skills as a writers, and his new literary technique—something which I recently experimented with it—what really struck me about this book was the staggering amount of research that went into its undertaking.  Capote researched, investigated, and studied, hundreds of articles, police reports, books, and people; a task that took him the better half of a decade.

Not detail was too little for Capote and he did whatever it would take to gather all the information on the subject that he could.  In example: Capote knew that he had an abrasive manner that could turn people off, and he knew that he would need access to a lot of people to write this book; in response to this, he convinced his good friend, and fellow author, Harper Lee to accompany him on his research.  Harper Lee was reported to have a much, more kind, gentler, attitude and since she was more well-known, and liked, than Capote, people were more receptive to her.  Harper Lee helped Capote get access to all the people in the town, police officers, and even the two convicts themselves, Dick and Perry.  Had Harper not accompanied him Capote would—admittedly—probably not have been able to get acquainted with all these people; so to accomplish this, Capote had to put his own ego aside and ask a friend for help, and then together they set out on a meticulous journey of gathering information and writing the story.

When undertaking a writing task, the typical fiction writing requires a scant amount of research—though, often a lot can be necessary, in regards to the whole of the book, research isn’t the main aspect; in fiction it’s typically creativity and the actual writing which consume the most time—and the typical non-fiction writing requires copious amounts of research—depending on the type of non-fiction, of course; historical non-fiction requires a bit more than memoir non-fiction—but Capote’s undertaking required both, because he sought not just to tell the factual information of the murders that took place in Kansas, but he sought to do it in a fictitious creative way that combined both approaches, hence the new genre of the non-fiction novel. This I believe is one of the reasons why the process took so long; and for a writer, it can seem rather daunting to know that to create a masterpiece it can take so long for a single piece.  Like Michelangelo who created the Sistine Chapel over several years, doing only that.  Most writers don’t have the single-minded-ness, or often the opportunity, to give such devotion to a single cause. But Capote was already a famous author at the time—though nothing near the heights he would reach after In cold Blood—and he had the opportunity and means to be able to spend all his time on one single task.  This single-minded-ness is what I believe made the difference between In Cold Blood being just another remaindered book versus a book that would still be read decades later.  This is where I learned from Capote.

In my current writing, when I had decided to give third person non-fiction omniscience a try, I had decided to interview my girlfriend, Emily, and several others who were involved. And although during first and second drafts I had interviewed them, for the switch to third person, I decided to take it deeper.  I asked, as I hadn’t done before, not just for their memories of the actual events, but also of their emotions and thoughts leading up to, during, and after.  These in-depth interviews allowed me to take my own writing deeper and although non-fiction I was able to give it that omniscient third person point of view approach.  Now, granted, my interviews were of only a few, and my research paled in comparison to Capote’s, it did take quite a bit of time, did add another layer to my work, and did take longer to write.  And although, I am remiss to even consider the possibility of putting as much work, and as many years, into my current project as Capote had, just the thought of knowing that it’s necessary to go that extra mile, works as an inspiration to make sure that I, too, have every I dotted and t crossed.  And going the extra mile doesn’t just meat doing more research than typical; often it means actually, physically, GOING the extra mile.  When Capote set out to write In cold Blood, he wasn’t content with mere library research.  Calling people on the phone for interviews wasn’t enough for him.  He couldn’t simply research Holcomb, Kansas, in a book.  No, he went down there.  He lived there.  He didn’t just call up someone to interview them; he went down there, shook their hand and looked them in the eye.  He didn’t settle for a lackluster description of the prairies and farms of Kansas, he went down to the farms, petted the cows, and walked the plains.  Going the extra mile makes all the difference in writing.  Knowing this, and how much great writing craves attention to detail, should stop a lot of would-be-writers.  But that’s not always the case.

Many people believe that writing is easy. That it should come naturally.  That it should flow.  However, no great writer, from Truman Capote to V.S. Naipaul will ever make the statement that writing is easy.  Writing is a great undertaking. And although I hope no single book ever takes my so long, consistently, single-mindedly, to write as In Cold Blood did Capote—even though my current one has been in the work for several years now—I believe that having the willingness to take on such an endeavor, and having the strength of will to see something through, is what makes all the difference in great writing.  Capote didn’t know that the book was going to take as long to research and write as it did, but he was willing to give the book and the process as long as it would take to create the work which he sought.  And that is what made all the difference.

Determination and perseverance. Such things are not typically talked about when discussing the strengths of a good writer and of good writing.  But they should be, it would scare away more of the would-be-writers.  Some things simply take time and a level of determination that most aren’t willing to give.  Had Capote not been as determined to write such a detailed, informed story, then the writing and story itself, probably, wouldn’t have come across as strong or as powerfully memorable.  Good writing takes time, it takes determination, and it takes a lot of hard work.  This is what Capote shows in his magnum opus In Cold Blood.  The testament to literature isn’t just the fine writing itself it’s the level of researching and diligence that went into the non-fiction novel.  A great writer can never be determined and lazy the two are not synonymous with great writing.  Capote proves that great writing, and being a great writer, takes an uncommon level of determination.