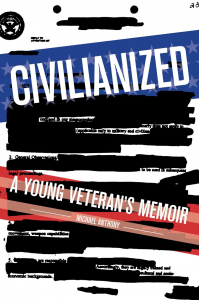 Hey Everyone! I wanted to let you know that my new book is officially for sale and available for Pre-Order.
The title is: Civilianized: A Young Veteran’s Memoir. It’s a story about my homecoming from Iraq and some of the struggles I faced (though it’s a bit darker, and funnier than it might sound/seem). Here’s the text from the jacket:

“After twelve months of military service in Iraq, Michael Anthony stepped off a plane, seemingly happy to be home–or at least back on US soil. He was twenty-one years old, a bit of a nerd, and carrying a pack of cigarettes that he thought would be his last. Two weeks later, Michael was stoned on Vicodin, drinking way too much, and picking a fight with a very large Hell’s Angel. At his wit’s end, he came to an agreement with himself: If things didn’t improve in three months, he was going to kill himself. Civilianized is a memoir chronicling Michael’s search for meaning in a suddenly destabilized world.”

Pick up a copy today!