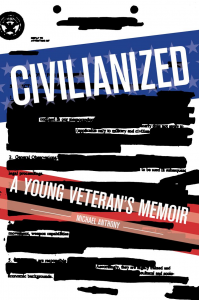 Here are a few of the endorsements that Civilianized has received so far:

“Civilianized has the introspection of a literary memoir and the narrative momentum of a novel.”
–Booklist

“Michael Anthony writes with emotional clarity, dark wit, and unpremeditated honestly. But what stayed with me most, I think, were the quiet punches to the gut: That to kill oneself, one must not only feel like dying, but also like killing, and the feelings could not be farther apart. That what messed with him the most was not the brutality of his foes but the moral bankruptcy of certain commanders. That it is not so much the intensity of combat that derails a soldier but the flatness of its absence. I won’t soon forget this book.”
–Mary Roach,

“Michael Anthony’s Civilianized howls with hard-earned wisdom. An unflinching story of homecoming and the after-war, Anthony has been to the brink and back. He writes with both soul and candor, and for that, contemporary war literature is in his debt.”
–Matt Gallagher,

Author of Youngblood and Kaboom: Embracing the Suck in a Savage Little War

“Anthony navigates the dark side of a veteran’s homecoming with honestly, skill, and even a touch of humor. Prepare to be disturbed and entertained in equal measure.”
–Brian Castner,

“In this tender memoir Civilianized, returning Iraq war veteran Michael Anthony hurls us into the raw, moral betrayals of war and the awful moral dislocation of coming home. At times hilarious, at other times harrowingly sad, Anthony’s memoir screams out at us to pay attention to the needs of our veterans.”
–Nancy Sherman,

“Important and essential, CIVILIANIZED is an unflinching look at the dark hell of reintegration. Michael Anthony’s personal story provides us with a deeper understanding of the war that many of us post 9/11 veterans face alone when returning home. A must read.”
–Colby Buzzell,

Author of My War: Killing Time in Iraq and Thank You for Being Expendable