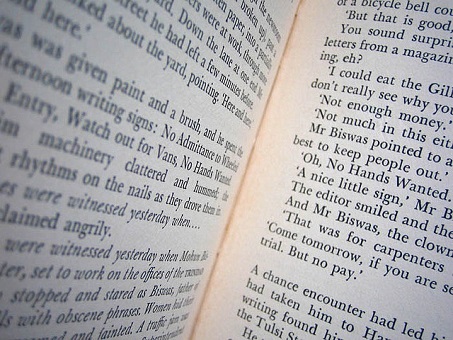 Life can pass by without every really hitting someone; moments flow into moments, and without awareness things can go unnoticed. What V.S. Naipaul has done with his novel, A House for Mr. Biswas, is show the reader the moments of a character’s life and the awareness, or lack of, which encapsulated the entirety of the character. His story is not one of romance, love, crime, drama, mystery, war, or anything else. It is simply the story of a man and the moments of his life and the accumulation of those moments. What this accomplishes, though, is that it gives the reader a deep connection, not to the story, but to the character of the story. And it is the characters that really make a story come alive. Without characters there are no stories, merely events. This is a useful, and powerful technique, and one which not many writers can accomplish.

The general storyline of A House for Mr. Biswas is not very impressive. As the title alludes to, it truly is a book about a man named Mr. Biswas who merely wants a house. There is, of course, a lot more to the story, but not in the typical sense. There is not great mystery waiting to be solved. There is no discourse on love or politics. There is no single action that moves the book forward. Mr. Biswas is all there is, and that’s enough. Because Mr. Biswas is a character that V.S. Naipaul has brought to life; he feels real, he looks real, he sounds real, and his thoughts seem real. This realness is what truly connects the reader to the characters. Even though Mr. Biswas is not a likeable character, the realness of him is what makes him unique, and is what helps drive the reader forward. For instance, in a scenario where Mr. Biswas attempted to ask his aunt Tara for money; V.S. Naipaul tells us the story of Mr. Biswas wanting to ask his aunt for money, but this one scene goes on for pages and pages, and intertwined within the scene, we have Mr. Biswas’ changing thoughts and emotions about whether or not to ask his aunt for money.

At the beginning we see that Mr. Biswas is already ashamed of having to ask his aunt for money, hence wanting to catch her alone. Then we see his thoughts as he realized he can’t ask for money from someone who’s not doing well. And things progress from there until he realizes that the time to ask for money has passed, and then eventually he becomes glad that he hadn’t asked for money. As people, real people, and not characters, what V.S. Naipaul presents here seems to be an actual realistic changing of thoughts and feelings that hits real people. Nothing in real life is as linear as it often appears in fiction, especially story driven fiction, rather than character driven fiction. Instead of being concerned with entertainment or carrying the story forward, it seems as though V.S. Naipaul’s only concern is with conveying a realistic character/story. This aspect of conveying realistic characters is his real power and where the most is to be learned.

The above example of the changing thoughts of the main character Mr. Biswas is not unique to that one section and situation. The entire novel is filled with the changing thoughts and feelings and emotions of Mr. Biswas and they are weaved in throughout longer stories, in little parts, so that they add in an extra effect that gets a reader thinking. For myself, as a reader, I know that my thoughts would have been very similar to Mr. Biswas’ in the same situation. If I were about to ask someone for money but the person had just finished telling me how bad things were for them, then in that moment I wouldn’t have asked for money, most real people wouldn’t have either. But if a different writer were writing the story, they might have asked themselves “what would make this scene better? More entertaining? Etc.?” and they might have changed the situation to something else; not because it was realistic, but because it would have moved the story in a certain direction or made it more entertaining. It seems as though V.S. Naipaul chose realistic expressions, thoughts and actions, rather than ones which may have been more entertaining or sensationalistic. He could’ve had Mr. Biswas killing people, or stealing, or a million other things that could’ve made the story more interesting, but instead he took a character, Mr. Biswas, wrote this character up, and took him for a realistic walk through the pages. This is what made his novel memorable. He didn’t introduce us to a character he introduced us to a real person.

In writing, authors often struggle to let their characters come alive. Often, the idea of an entertaining story takes precedent over any realistic character element, and although that can often be a good thing; it can also be a good thing, every now and again, to come across a novel with the mere intent of presenting a good, well-rounded, realistic character. Many writers say that they write dozens of pages about a character’s background before they even place them into their novel—and even then often only a few sentences or pages from the character descriptions actually make it into the novel. What is important to them though, and ultimately the story, is that the characters are thought about and properly birthed. The writer takes them through their years as an infant, child, teenager, young adult, adult, elderly adult, etc. And even though the story may only be based on the character’s adult life, everything becomes important in the writing. The way a character flicks their cigarettes, or sucks on their teeth, or is afraid of water, or even the simple way that they smile; it all becomes important in a character driven novel and it’s what truly connects the reader with the character and makes them interested in reading more. In a Stephen King novel, readers don’t care about the characters as much as they do about the plot and the story and what’s happening, or is going to happen. But in novels like A House for Mr. Biswas, what happens to Mr. Biswas isn’t as important as Mr. Biswas himself. And in character driven novels this, ultimately, becomes their strength. A reader isn’t concerned with what is actually happen, but more concerned with what is happening to whom.

What writers can learn from a work such as A House for Mr. Biswas, is how to connect readers with a character. The character may not have to be likeable, but as long as they are realistic in the sense that their actions and thoughts match with who they appear as on the page, then a reader will become connected with this realistic character and will continue reading forward to find out what happens to them and how they will react in different situations, even if those situations aren’t life or death or sensationalistic.