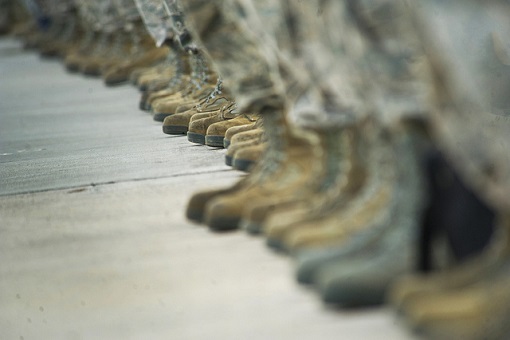 What sets a combat veteran apart from others who suffer from PTSD is in the background of the trauma. While you don’t have to be in a war zone to have PTSD, the trauma related to a war zone is a far different one from other causes of PTSD. This isn’t to diminish the real life suffering and psychological effects of non-combat PTSD suffers; however, there is a far greater prevalence of PTSD as a result of combat than any other singular form of trauma.

One of the first major differences is in the entire lifestyle of those in the military. Regardless of what service you are attached to, be it Navy, Army, Air Force, or Marine from the moment you wake up to the when you hit the pillow at the end of the day (or days later) you have certain requirements that non-military people do not. Your life in the military is regulated every moment of every day; from when you can eat, to how your dress, to your physical fitness, to who you talk to and how you address other military personal. This is something that very few non-military people can relate to. Even in a combat zone, certain regulations must be upheld either as a security measure or as a result of a policy put in place by someone in command. For example, it is required that all lower enlisted soldiers stop and salute a higher ranking officer upon coming in contact with them. In a combat zone, this is not only frowned upon but can be seen as a hostile action towards the officer in questions otherwise known as “sniper checking.” The reason for this is that in a combat environment, you never know when a hostile enemy can be watching you. As a result this non-combat curtesy can let the enemy know who is a better target should they need to or want to attack. This is just an example of the many rules, regulations, and standard operating procedure that is the daily life of someone in the military.

While this strict regulation may seem harsh or unnecessary to those outside the military; this is the everyday culture that has been in place for many generations. However, when things go south these regulations kick in. The term conditioning comes into play a lot when it comes to the military and their training. The ultimate goal of any combat or even non-combat training is to make the process as easy and repeatable as possible. This way when a soldier enters into a high stress situation such as combat their instincts take over and the conditioning allows them to do whatever needs to be done with little or no thought towards what has to be done. This secondary high functioning brain as it may be called is like a back-up system. For many people, they will go their whole lives not having to deal with a situation that requires this need but for anyone that has to deal with life and death situations such as nurses, firefighters, or in this case a combat soldier, this secondary brain is the key to survival. However, as a result of this the primary brain has to deal with everything that happens when the secondary brain kicks in. Think of it in terms of a computer with two operating systems. In the event that the first operating system crashes, the secondary kicks in to get the primary back up and going. However, once the primary is back up you still have to deal with the issue that caused the crash in the first place.

This is where things start to fall apart for most combat soldiers. With the combination of factors addressed above on top of general societal factors; that can be all together foreign for someone who’s spent the majority of their adult life in the military, it is no wonder that many of these individuals have extensive problems once they are out. Even non-PTSD vets have a hard time adjusting to general civilian life. Add to it the stress, anxiety, guilt, etc. that accompanies having survived a combat related trauma makes it an almost impossible task for anyone to deal with alone. Additionally, because of the conditioning mentioned above, their brain can and sometimes does shift into secondary mode when there primary brain cannot handle a situation. This is often where “flashbacks” or violent reactions come into play for some people.

Suffering from PTSD is never a walk in the park for anyone. For a combat veteran it is a whole different ball game. Between the general PTSD trauma, the conditioning, and change in lifestyle from military to civilian many veterans suffer as a result. Thankfully there are a number of programs out there to address these individuals, however, until our societal views and beliefs related to psychological problems changes we can only do so much.

3 thoughts on “Military Discipline and PTSD”