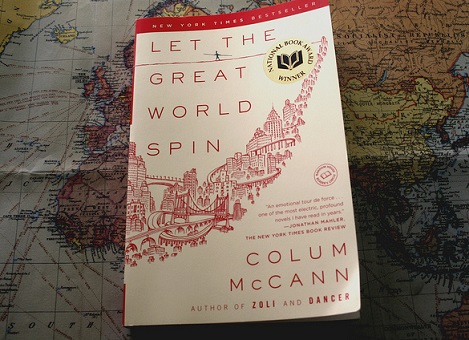 McCann grabs you… at first. Starting with a tale of a man on a tightrope, he leads the reader through an interweaving story of human nature and internal and external connectedness. This beginning, and complex weaving of storylines, has shown me certain opportunities, and weaknesses in my own writing, and many ways in which I can improve. However, like all my readings, I’ve learned that every author has weaknesses, which can teach as much as his strengths.

One thing that came up for me about the story’s, beginning, middle, and end, was that nothing about the story or plot actually captured me. A man is tightrope walking, so what? A priest is trying to find himself, so what? A mother misses her son, so what? Each theme is somewhat interesting, and each plotline somewhat intriguing, but enough so that it would keep me reading? No. Not for me. What did keep me reading, though, was the writing itself—and what was written between the lines. Although the pages weren’t dripping with philosophy and thinking points about life, there were enough moments scattered throughout which made me stop and think about life and death, and the meaning of everything. And that’s all a writer can ask for; to make his reader stop and think. In the military we say “Mission first, but soldiers always.” In writing this is best parlayed as, “Entertainment first, but thinking always.” McCann’s philosophical readings gave the book a deep ethereal feel, but his real strength is in his descriptions.

A man walking a tightrope across two buildings doesn’t interest me, at all, really. Even if the man’s life is at stake and there’s a chance he could die. Who cares? But… if I had a friend who was tightrope walking across two buildings and his life was at stake, then I would care. And that is McCann’s true strength. Through his physical and emotional descriptions he connects you to his characters. Someone, an event, that typically would not, and should not, interest me, suddenly compels me forward, to read more and more. This happens because of connectedness. I see the characters. I feel them. I care for them. I want to know what happens to them. This is why I continued reading. I didn’t care about some stupid story about someone walking across a tightrope or some stupid woman who lost her son; but it wasn’t just a man walking across a tightrope or some mother missing her son; it was my friend walking across a tightrope, my mother missing her son.

Combined with somewhat intriguing plotlines and inviting, inventive writing of emotional and physical descriptions, and the occasional thinking points, collectively, Let the Great World Spin, comes together to form a truly enjoyable book. Now, on to the lessons learned.

McCann started his book with a man tightrope walking across two buildings. It wasn’t the best, most intriguing idea, but the writing was so descriptive that I was drawn forward to see more and find out what happens. Then, when I got to the next section, and scant a word was mentioned about the tightrope walker, I was mystified. At first, there appeared to be no connection, and I thought that perhaps the book was merely a collection of short non-conjoining stories. It wasn’t until deep in section three that the tightrope walker was mentioned again, and that I would begin to see how the story would take shape. And seeing how the author was going to connect the pieces, I became even more intrigued; not by the story itself, but by how everything was going to unfold.

In most books I read, and in my own writing, things are written in a linear format of a, b, c and d. There’s the occasional flashback and future whispers, but mostly things are written from point A to point B. But McCann has written his own indirect alphabet. Slowly things began to reveal themselves. And although, once I was done reading the book, I appreciated the uniqueness of it and loved how it was written, had the writing not been so descriptive and inventive and inviting, even a tiny bit less, I would not have finished the book; nor would I have gotten to the point where I would have realize that the stories were connected. What this went to show me is that there is no certain way in which stories need to be told or information to be given. There are other ways and other points of view. Had McCann written his book in the typical linear format then surely it wouldn’t be as highly praised or widely read.

The power isn’t in the story itself; because the story isn’t unique or original; the power of the story lies in the way it’s told and the way it’s written. As mentioned early, the book wasn’t mainly driven by its plotlines, and what really kept it going was the writing. Descriptions went on and on, sometimes too long, but still they somehow managed to capture my eye. Typically, I would find such writing as blowhard and overly verbose; however, McCann’s writing had a different nature to it, once in which I wish I could capture. His words and ideas flowed; because he combines the internal descriptions with the external ones. This can best been seen in an example from the beginning of book two.

“He surfs the thin metal platform as the train jags south out of Grand Central. At times he gets dizzy just anticipating the next corner. That speed. That wild noise in his ears. The truth is, it frightens him. The steel thrumming through him. It’s like he has the whole train in his sneakers. Control and oblivion. Sometimes it feels like he’s the one driving. Too far left and the train might smash into the corner and there’ll be a million mangled bodies along the rail. Too far right and the cars will skid sideways and it’ll be a good-bye, nice knowing you, see you in the headlines…”

Like my stories, my own descriptions tend to be linear. The house is red. The man is fat. The house feels haunted. The man feels ashamed. Et cetera. How do I combine the descriptions and feelings of both? This is not a rhetorical question, either; please answer in your response with how I can better do this. Examples would be helpful, too.

1 thought on “Annotative Essay on the book: ‘Let The Great World Spin,’ By Colum McCann”