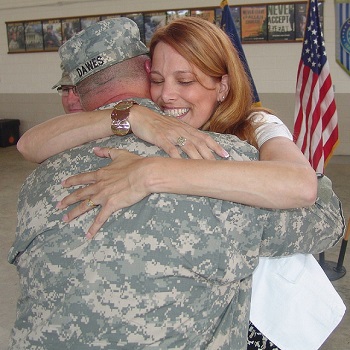 Why does my military spouse have PTSD?

Do you have any idea what PTSD is? Let’s paint this kind of picture: A young man is on verge of graduating on high school. He had a good family and decided to serve the country as a military man. Before he entered the military school, he has no prior history of mental health issues or substance abuse. He successfully joined the military and was given the combatant role. He was trained with the only purpose of striking out violence for the benefit of his country. He was repeatedly placed in situations where he strikes out violence and is rewarded intrinsically, extrinsically, and monetarily. The wartime traumatic events exposed him to the stress that leads to the PTSD (Post Traumatic Stress Disorder) development. He then leaves the military service and is anticipated to leave everything behind with a small transitional aid. The post-traumatic disorder makes the life and transition difficult. Drug and alcohol abuse helps ease those kinds of symptoms. He then becomes very dependent on drugs and alcohol decreasing his ability to effectively cope up and increasing his problems. This young man, who happens to be your spouse, is now in a very dangerous place socially, physically, and mentally. His coping skills still consists of substance abuse, violence, and compartmentalizing, which are signs and symptoms of PTSD that can lead to legal and family problems.

The fact that there’s such a huge correlation is not really surprising, especially to those patients who completely knows or deals with PTSD patient, but many people still ask why this’s the case. Actually, there are 3 theories that the researchers established with the high correlation between the substance abuse or drug and alcohol addiction and Post-Traumatic Stress Disorder. The research supports the entire theories by differs among the demographic of post-traumatic disorder.

This theory on high risk states that the drug and/or alcohol addiction occurs before the disorder’s development. This has the idea that the abuse on substance leads to the activities with high risks and that or some of these events lead to PTSD development. While this may be true to some cases, the military veterans aren’t likely to be taking drugs and/or alcohol during or prior to the traumatic combat events or experiences.

Another theory is the susceptibility theory which states that there’s something with the drug and/or alcohol abuse that increasing the susceptibility of a person for post-traumatic disorder development following the traumatic experience. While it’s not exactly known what this might be there are available theories for review before doing further research. The substance abuse does alter the normal structures and functioning of systems in the body; these kinds of facts are the grounds for this theory’s foundation.

Regarding what theory applies to your spouse, there’s a definitely correlation between the post-traumatic disorder and substance abuse; many of these happens especially with our returning military veterans. Often, they find solace by drinking alcohol and using drug in order to cope up with the distress but over time, they will only find that their problems have just increased. These individuals will lead to chemical dependencies which in time will be too hard to control.

PTSD in our military spouses has been shown to display itself through hardship in controlling the irritability, anger, self-medicating with drugs and/or alcohol, and the high risks and reckless behaviors; an old concerning group of problems that are only aggravated by drugs and/or alcohol dependency. Now, cover this with an altered moral state and decreased inhibition that is developed in the mind of all combatant and much more problems develop. This is a kind of individual that is in great need of comprehensive care, yet many still go untreated.

Why are there are too many veterans that suffer from this disorder? Don’t they want to get better? Do they lack enough knowledge in order to understand what’s really going on? Are we, people in the society not effectively doing our part for them? It’s very important for these individuals to seek services though capable medical institutions to handle both their PTSD and substance abuse.