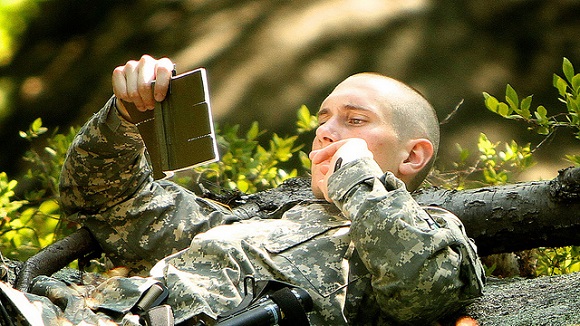 A lot of soldiers today underestimate the importance of adequate mental preparation for the ordeal ahead of them. In order to successfully mentally prepare people who will undergo Basic Training and graduate into the military, some suggest that the U.S. Army should start teaching the principles of stoicism during Basic Training.

Why should the nation’s military change already established standards to teach recruits a relatively unconventional belief system? Stoicism has the potential to be powerful to a group of soldiers. It can teach them how to cope with what happens around them when they’re on duty.

Stoicism also helps them hold onto their true character, while facing harrowing situations, when away from what’s familiar to them. Not only that, stoicism is essentially for helping those enlisted to keep flourishing as a human being in light of traumatic experiences.

Stoicism, in the modern world, can essentially help people cope with emotional and physical trauma without responding to such situations in a highly reactive way. It helps people accept the inevitable, or what has happened, without reacting in a way that’s ruled by their emotions. The idea is that ‘whatever happens has happened by means of forces they can’t control, and it has no real bearing on their character.’

In this way, stoicism acts as a ‘practical guide for life.’ While it helps teach people how to approach situations deftly, it also encourages people to become more mentally tough. The lessons people can learn from stoic philosophy makes it a natural philosophy for the currently enlisted to utilize for coping with traumatic experiences.

Stoicism and How To Cope

The principles of stoic philosophy can help the enlisted learn how to cope with both physical and mental trauma, especially since some may develop conditions like post traumatic stress disorder as a result of entreating such trauma.

Learning how to flourish as a human being is the main reason why stoicism may work within the context of the U.S. Army’s Basic Training. As previously mentioned, Stoicism maintains that the main goal of life is to flourish.

To flourish as a human being is to:

Establishing such a mindset in soldiers from the start can help them avoid developing negative behavioral patterns that may directly contribute to the develop of post traumatic stress disorder and other mental disorders. How soldiers can maintain their true character, as they remain Stoic, also plays a role in helping them flourish.

Stoicism states that people can become harmonious once again with nature, as long as they can return to their true character. Character is our ability to distinguish good from evil, while also acting upon our interpretation of nature.

How people weave themselves through nature determines their character, provided they act internally based on how they perceive situations. As a character, it’s essentially our duty to react objectively—what happens around us ultimately doesn’t influence our true character. Naturally, Stoicism teaches that external elements don’t help people flourish; people can, however, use those elements to build character if they choose.

By accepting that such forces don’t bear down on their character, soldiers can essentially learn how to cope with potentially traumatic experiences. This helps keep their character harmonious with nature, allowing them to live a more fulfilled life, even after their time enlisted in the Army.

Stoicism and Being Human

Many famous sayings ultimately boil down to ‘war changes people.’ Soldiers, especially those headed off to a war field, often don’t know how to cope with being sent in such a harrowing situation. They respond to their situation by harboring feelings of fear, resentment and all sorts of negative feelings.

While the U.S. Army likely isn’t going to change their training regime any time soon, the soon-to-be enlisted should learn more about Stoicism. Undertaking enlistment in the Army can be daunting to the psyche and the body, but if we can learn to accept what happens, that’s what keeps us harmonious as humans.