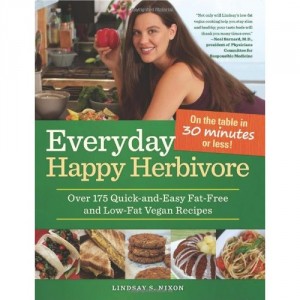 Lindsay Nixon is a chef and the author of two vegan cookbooks: The Habby Herbivore and Everyday Happy Herbivore (and a third one is on the way: Happy Herbivore Abroad).  You can follow her blog at: HappyHerbivore.com.
Q: Your first book, The Happy Herbivore, features over 175 healthy vegan recipes, which is a huge number of recipes—most people, myself included, probably only know a dozen—so I’ve gotta ask, what keeps you going recipe after recipe?

A: What keeps a painter painting? Exactly 🙂

Q: What’s would you recommend for someone who wants to start coming up with their own recipes?

A: Get in the kitchen and try. Find your own style and vision. Don’t be afraid to fail.

Q: Your recipes are all healthy and vegan, but sometimes it’s hard to get someone to eat something healthy, and I’ve heard the best way to do it is a little bit at a time. So if you were trying to convince someone to start eating healthy, what’s the first thing you’d tell them to do; give up sugar, give up meat, give up dairy or wheat, etc?

A: If nothing else, give up dairy. It’s the worst. It’s a good starting point, too but I find most people have better success (long-term) when they make a total 180 rather than take baby steps, but we all have to do what’s best for us.

Q: You’ve mentioned to me that your father and brother-in-law both served in the military, and for all those veterans who are vegans/vegetarians or are thinking about becoming one, what tips can you give for when they’re out in the field or are deployed to a secluded area where a Whole Foods, or any grocery store for that matter , aren’t available? (I.E. What vegan snacks/foods would you recommend for a very, very, very long camping trip?)

A: A friend of mine is a vegetarian in the Army. He’s been deployed twice and both times they had vegetarian options in the field, which I think is fantastic. He also has a lot of care packages sent from the states. I sent him instant oatmeal, granola bars, trail mix, packets of peanut butter.

I’d have sent canned beans if they weren’t so heavy!

Another friend of mine works for the UN and spent about a year in rural Africa doing humanitarian relief work. She stayed vegan the entire time; she got by eating the vegetables and grains she could find (including digging yuca roots from the ground) and she took a suitcase full of mori-nu tofu.

I also took a class last summer on edible wild plants and will never look at the ground the same. Anyone who is camping or being stationed abroad (assuming it’s not the desert) absolutely should take one of those classes. You’ll never go hungry if their are leaves, weeds, flowers and roots to eat. Some are quite tasty!

Q: When you’re working on a new recipe how long does it take before you’re happy with it?

A: It depends. Most recipes I nail it on the first try. Others take a second go, a small tweak or something. A small handful took over 5 tries, but I really wanted it to work so I kept trying. Usually if it’s not a win first time I move on to something new.

Q: How do you decide which recipes make it into the book?

A: I have a large group of testers. Their feedback determines everything.

Q: You’ve got another book that recently came out, Everyday Happy Herbivore; what can we expect from your new book that wasn’t in your first?

A: EHH came out last December- – and I have a new book coming out this December, Happy Herbivore Abroad.

My first book (HHC) is all about comfort foods — recreating healthy and vegan versions of foods we grew up with like “fried” chicken, or “meatball subs” or pizza. EHH is more of a streamlined “back to basics” cookbook. HH Abroad, as the name suggestions, is international cuisine.

Q: Any last tips for someone trying to cook a healthy vegan meal?

A: Stick to the basics: fruits, vegetables, whole grains and legumes.

Read Part Two Of This Interview: Part Two of an Interview with Lindsay Nixon The Happy Herbivore

1 thought on “Interview with Lindsay Nixon the Happy Herbivore”