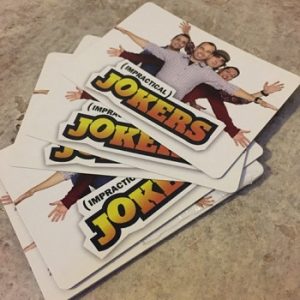 The show Impractical Jokers is one of the funniest things on TV right now. In case you’re not familiar, it’s a reality series where four friends Joseph “Joe” Gatto, James “Murr” Murray, Brian “Q” Quinn and Salvatore “Sal” Vulcano challenge each other to complete ridiculous pranks (which are, of course, filmed by hidden cameras).

It might not sound like much, but it’s a hilarious show. Trust me, try out a few episodes–it’s one of those shows where you need two or three before you get into it (that’s how it was explained to me and I fully agree; when I saw my first episode I was like “Yeah, this is okay,” but by episodes three and four I was hooked!)

Anyway, here’s why I’m writing about the Impractical Jokers today: Whenever I watch the show, part of the fun is imagining myself and my friends in similar situations and pulling similar pranks. This got me thinking, and as I result I invented: The Impractical Jokers Card Game!

Here’s the front of the cards:

There are two sets of cards:  Challenge Cards and Punishment Cards (samples below).

How to play: You and a group of friends go to a bar (or some other public venue) and each person draws a challenge card. [The challenge cards are all based on challenges that the Jokers have done on their TV show; I tried to choose simple challenges, that the casual fan would have fun with and be able to accomplish while at a bar with friends. (Also included are Joker VS Joker Challenge Cards and Jokers Wild Cards–where your friends choose your challenge!)] 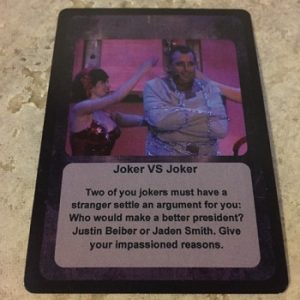 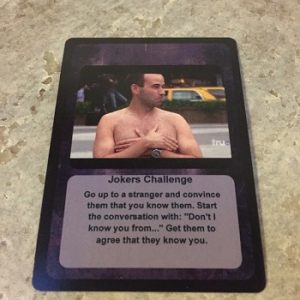 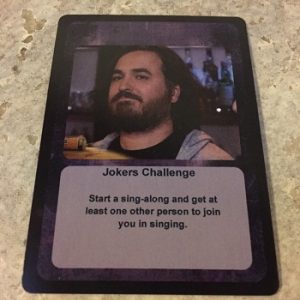 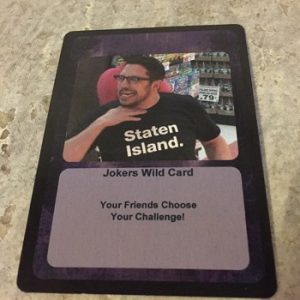 After each participant either completes or fails their challenge, all losers will then draw a punishment card (other option is that you continue with the challenge cards until there is only one loser). 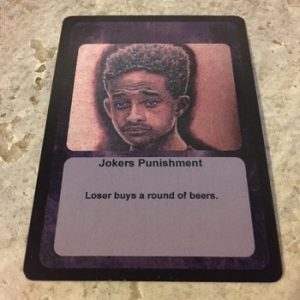 The punishment cards also have a different back than the challenge cards (so they can easily be told apart). 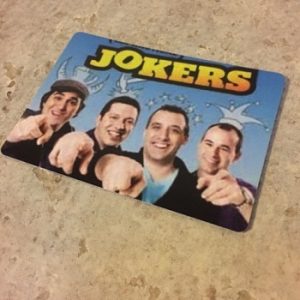 The punishments are nothing like they are on the show. They’re more simple, buy a round of beers or appetizers for your friends, automatic designated driver next time you all go out, give your friends your phone and let them post a Facebook update for you, etc.

Now, here’s the deal. This is a supper fun game, I’ve played it with friends, but I’m not here to sell you the game. What I need though is your help in contacting the Jokers and convincing them to create an official Impractical Jokers Card Game. It’s hard coming up with challenges and punishments and I think we need the Jokers to add their magic touch and create a fun game that all us Impractical Jokers fans can take with us to the bar with friends.

If you want to help, just link the idea/images to the Jokers on Facebook, Instagram or Twitter, etc. Maybe it catches on, maybe it doesn’t. Just a fun idea I had and wanted to see if there was any traction.

4 thoughts on “The New Impractical Jokers Card Game – Play at the bar with friends! (Pics included)”