The Veteran Code of Health’s fourth chapter focuses on Nutrition.  After subsisting on military rations for any extended period of time, the definition for what qualifies as food could easily get distorted.  Yet with the body turning over approximately two billion red blood cells every second, you literally are what you eat.  Thus, the following rules should be implemented when determining whether or not it should be on your plate: 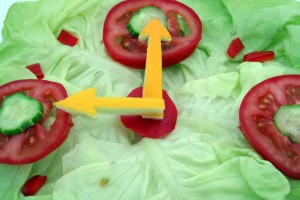 –the longer the shelf life of a food, the worse it is for you (the exceptions to the rule are raw seeds/nuts and fermented foods like sauerkraut).
–stay away from HYDROGENATED /PARTIALLY HYDROGENATED foods (baked goods are a major culprit).
–stay away from ARTIFICIAL COLORS/SWEETENERS/FLAVORS or PRESERVATIVES (just about anything pre-packaged).

–eat organic/local—it’s better for you and the environment.

–eat a balance of macronutrients (carbohydrate/fat/protein) at every meal/snack.

What we put into our mouths is recognized by the body as either a food or a toxin.  Food supports and nourishes the body, allowing a miraculous array of chemical reactions to take place to run our metabolic pathways.  Toxins, on the other hand, must be eliminated before they can reach dangerous levels and threaten the very survival of the body.

Of course, it takes nutrition from REAL food to “take out this trash.”  When these nutrients are unavailable, as so often happens from eating typical, processed to death non-foods (foods so void of nutrition that they take more from the body than they give), the body cannot get rid of these toxins.  Nature has provided us, however, with an ingenious method to store these toxins safely until such factors are present that allow us to eliminate them.  It’s called fat.  Not just a storage site for excess calories, one of fat’s major roles in the body is to attract toxins and store them away from essential bodily organs.

The average American eats approximately 150lbs of carcinogenic food additives each year.  Our nutrition is so poor that we could not hope to assimilate and metabolize all of the C.R.A.P. (Caffeine, Refined sugar/flour, Alcohol, Pasteurized dairy/juice) not to mention pesticides, artificial colors/flavors, and preservatives commonly found in the American diet.  The result is weight gain as the body shuttles this barrage of toxins into our fat stores.  Additionally, all of these processed non-foods actually rob us of nutrition: to digest this mountain of C.R.A.P., the protein, vitamins, and other essential nutrients our food should have provided are stolen from our tissues.  This creates inefficient organs, weaker muscles, and brittle bones and teeth.   We’re literally starving to death on full stomachs!  Fortunately, books by people like Paul Chek, Loren Cordain, or Michael Pollan are getting into the hands of more people who are becoming increasingly concerned with their internal environment.

The default solution for a faulty diet is typically exercise.  But performed incorrectly, it can only magnify the dietary destruction.  Thus, the inclusion of Movement as the fifth subject in the Veteran’s Code of Health is incredibly important.  After all, exercise is a stress.  And if you stress as system which is already under load, you risk breaking that system.

The body is meant to move.  Movement helps blood circulation and lymph flow, allowing the body to deliver nutrition and eliminate toxins as well as other byproducts of cellular functioning.  But it takes energy to exercise.  And if a person is energy deficient secondary to detrimental lifestyle considerations that have kept the SNS in a state of perpetual stimulation, then there is nothing left for that person to give.  Working out can literally be the straw which broke the camel’s back.  The solution then is not to workout but to work in.

In contrast to working out, when a person is actually taking energy and resources away from the body, working in is any activity which helps increase the vitality of an individual.  Examples include tai chi, basic yoga, or even gentle walking.  Paul Chek, in his book How to Eat, Move, and Be Healthy, lists a number of different movements which he refers to as Zone Exercises.  All of them are extremely effective at balancing the autonomic nervous systems (i.e. the SNS and PNS) as they help move chi or “life force” through the body.  Whatever the chosen movement, it should finish with the body feeling energized and healthier than before the activity began.

Like working in movements, one of the fundamental qualities of the body is that it is rhythmic, following predictable cycles which have become deeply ingrained in our physiology.  One of these cycles is Sleep.  And it’s the final concept the veteran, indeed anyone, must understand for true health to be fully realized.

For generations, humans have gotten up with the sun and gone to bed within a few hours of sunset.  Our bodies are literally designed to function on, not just a sufficient amount of sleep, but on a specific time for sleep, as well.  The release of growth hormone and other anabolic hormones happens predominately between the hours of 10 p.m. and 2 a.m. while the second half of the sleep cycle is devoted to psychogenic repair between the hours of 2 a.m. and 6 a.m.  Staying up until midnight to watch T.V. or work on the computer robs the body of two hours of physical recovery.  This error excites the SNS and results in an inability to recover from exercise or the activities of daily living.  Aches and pains soon become chronic and the immune system weakens, allowing the body to become susceptible to pathogens from both inside and outside the body.  In fact, medical professionals recognize shift work and ignoring our circadian rhythms as second only to smoking in the number and severity of adverse effects on our health.  So turn off those lights, shut off the television, get into bed by 10 p.m., and turn those dreams of health into reality.

All six subjects in the Veteran’s Code of Health are the basis on which wellness is built; only with a solid foundation in every one of them can a person build high levels of vitality and peak functioning.  While all of us are born with the right to sincerely honor ourselves, veterans have sacrificed so much that giving everything to others is their modus operandi.  However, even the ones who put country before anything else should understand a key teaching in quantum physics—we are all connected.  Thus, what we do to ourselves, we do to others.  For a veteran to faithfully serve; for a veteran to truly protect, he must first begin within.  The Veteran’s Code of Health will show him how.

Of course, each of the concepts above has only been briefly introduced.  For a more thorough discussion on how you can take responsibility for yourself and be in control of your own health destiny, visit the author’s website at www.triumphtraining.com.